When you book with an account, you will be able to track your payment status, track the confirmation and you can also rate the tour after you finished the tour.
Sign Up
254

Mesa Verde, Spanish for green table, offers a spectacular look into the lives of the Ancestral Pueblo people who made it their home for over 700 years, from AD 600 to 1300. Today the park protects nearly 5,000 known archaeological sites, including 600 cliff dwellings. These sites are some of the most notable and best preserved in the United States.

Mesa Verde is best known for a large number of well-preserved cliff dwellings, houses built in alcoves, or rock overhangs along the canyon walls. The structures contained within these alcoves were mostly blocks of hard sandstone, held together and plastered with adobe mortar. Specific constructions had many similarities but were generally unique in form due to the individual topography of different alcoves along the canyon walls. In marked contrast to earlier constructions and villages on top of the mesas, the cliff dwellings of Mesa Verde reflected a region-wide trend towards the aggregation of growing regional populations into close, highly defensible quarters during the 13th century.

While there are some decent views to be photographed in the area, the primary photographic subject is the old ruins.

Emmett Harryson, a Navajo, at a T-shaped doorway at Balcony House (1929)

Balcony House is set on a high ledge facing east. Its 45 rooms and 2 kivas would have been cold during the winter. Visitors enter by climbing a 32-foot ladder and a crawling through a 12-foot tunnel. The exit, a series of toe-holds in a cleft of the cliff, was believed to be the only entry and exit route for the cliff dwellers, which made the small village easy to defend and secure. One log was dated at 1278, so it was likely built not long before the Mesa Verde people migrated out of the area.[102][103] It was officially excavated in 1910 by Jesse Nusbaum, one of the first Superintendents of Mesa Verde National Park. Visitors can enter Balcony House through ranger-guided tours.

This multi-storied ruin, the best-known cliff dwelling in Mesa Verde, is located in the largest alcove in the center of the Great Mesa. It was south- and southwest-facing, providing greater warmth from the sun in the winter. Dating back more than 700 years, the dwelling is constructed of sandstone, wooden beams, and mortar.[106] Many of the rooms were brightly painted.[107][108] Cliff Palace was home to approximately 125 people, but was likely an important part of a larger community of sixty nearby pueblos, which housed a combined six hundred or more people. With 23 kivas and 150 rooms, Cliff Palace is the largest cliff dwelling in Mesa Verde National Park.

Located on the Wetherill Mesa, Long House is the second-largest Mesa Verdean village; approximately 150 people lived there. The location was excavated from 1959 through 1961, as part of the Wetherhill Mesa Archaeological Project. Long House was built c. 1200; it was occupied until 1280. The cliff dwelling features 150 rooms, a kiva, a tower, and a central plaza. Its rooms are not clustered like typical cliff dwellings. Stones were used without shaping for fit and stability. Two overhead ledges contain storage space for grain. One ledge seems to include an overlook with small holes in the wall to see the rest of the village below. A spring is accessible within several hundred feet, and seeps are located in the rear of the village.

This ancient structure was originally identified as reservoir, to support the mesa top with water for drinking and irrigation. On September 26, 2004, it became a National Civil Engineering Historic Landmark. In 2014 geo-spatial analyses showed that neither collection nor retention of water was possible in the supposed structures. The new interpretation sees Far view reservoir as a ceremonial space with procession roads in an adaptation of Chacoan culture.

This ruin situated on Wetherill Mesa contains 94 rooms, a large kiva, and a nearby reservoir. It received its name from four mugs the Charles Mason and the Wetherill brothers found strung together on a string. This ceremonial structure has a keyhole shape, due to a recess behind the fireplace and a deflector, that is considered an element of the Mesa Verde style. The rooms clustered around the kiva formed part of the courtyard, indicating the kiva would have been roofed.

Oak Tree House and neighboring Fire Temple can be visited via a 2-hour ranger-guided hike.

Spruce Tree House is the third-largest village, within several hundred feet of a spring, and had 130 rooms and eight kivas. It was constructed sometime between 1211 and 1278. It is believed anywhere from 60 to 80 people lived there at one time. Because of its protective location, it is well preserved. The short trail to Spruce House begins at the Chapin Mesa Archaeological Museum.

The Square Tower House is one of the stops on the Mesa Top Loop Road driving tour. The tower that gives this site its name is the tallest structure in Mesa Verde. This cliff dwelling was occupied between 1200 and 1300. 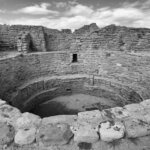 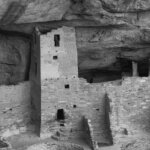 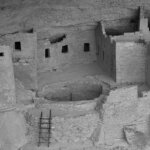 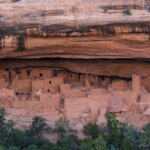