When you book with an account, you will be able to track your payment status, track the confirmation and you can also rate the tour after you finished the tour.
Sign Up
291

Colorado National Monument (locally referred to as The Monument) is a National Park Service unit near the city of Grand Junction, Colorado. Spectacular canyons cut deep into sandstone, and even granite–gneiss–schist, rock formations. This is an area of desert land high on the Colorado Plateau, with pinion and juniper forests on the plateau. The park hosts a wide range of wildlife, including red-tailed hawks, golden eagles, ravens, jays, desert bighorn sheep, and coyotes. Activities include hiking, horseback riding, road bicycling, and scenic drives; a visitor center on the west side contains a natural history museum and gift shop. There are magnificent views from trails and the Rim Rock Drive, which winds along the plateau. Nearby are the Book Cliffs and the largest flat-topped mountain in the world, the Grand Mesa.

Its feature attraction is Monument Canyon, which runs the width of the park and includes rock formations such as Independence Monument, the Kissing Couple, and Coke Ovens. The monument includes 20,500 acres (32 square miles), much of which has been recommended to Congress for designation as wilderness. 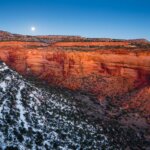 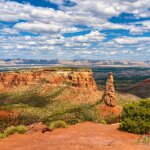